Objective of Our Awareness Program:

On 27th of March 2022 NewLife Shelter Foundation conducted a Community Survey to understand the needs and problems of the community citizens.

Details about our Awareness Program:

This Awareness Program was conducted on 27th of March which was a Sunday. Weekends are the usual day to find a working person at home. Hence, our team decided to conduct this survey on Sunday.

To answer how we called upon 42 unpaid volunteers from various locations within Delhi NCT, who were happy to lend a hand to us without any terms. Most of the volunteers visited our office near about 11:00AM where had a group orientation lead by Abhitosh Kumar (Delhi Executive head). In the orientation Volunteers were made familiar with NewLife Shelter foundation, it organisational structure, its ongoing projects and future projects in store. They were also made familiar with the localities where they would be conducting survey.

Later, they had a group discussion session with Neha (Team Manager), who guided volunteer throughout the survey and community. She also introduced them with the materials they will be carry and how will it help them to connect with the community. Neha also split these 42 volunteers into 8 teams with each having at least 5 members.

We earlier worked upon mapping the locality which helped us narrow down our survey to 4 regions, which helped volunteers to work efficiently without any hassle. By this we had 2 teams for every region and the survey was conducted smoothly and really fast by this.

Overview of the Awareness Program

Most of the volunteers of this awareness program reported at 11:00AM and had their orientation with Abhitosh Kumar. Later had their group discussion session with Neha and left for the survey by 12:00PM noon.

It took about 2 hoursto conduct whole survey. Volunteers left NewLife Shelter Foundation office near about 12:00PM to 12:30PM in batches and some conducting survey nearby returned in approximately an hour whereas some took up to 03 hours to return, but for them almost an hour was the too ad forth travelling time by foot.

After returning Neha took their reviews in rounds and they were handed over with Certificates and refreshments. Almost everyone returned by 04:00PM and left near about 05:00PM in the evening for their respective homes.

Feedback and Reviews of the Awareness program

As the Volunteers returned after conducting survey, Neha took their feedback and reviews. A detailed report of the awareness program is attached below.

Most of them were positive reviews for the ongoing projects which resulted by increase in footfall for our ongoing projects. Some Volunteers also reported what they found ill about the community like lack of sanitation and proper toilets in the community. This could lead to many health issues especially for women and teenage girls.

Photographs took by the volunteers also stated some issues regarding the same in the community.

Observations of the Awareness program

Volunteers took Survey of 147 households in the above mentions 4 regions. The majority who took part in the survey belongs to the age group of 18-40years Almost 8.8% being of age 30. As say for sexuality many were housewives or bachelors. The graph below represents the age groups of participants.

Needs of the society

From Majority of the households we concluded that the people of community seek help majorly in Education (Almost 62% households), Healthcare (Almost 39.5% households) and Employment (Approximately 43.5% people).

In health care too approx. 80% used public toilets of toilets build by government for community. These toilets were terrible and completely unhygienic. 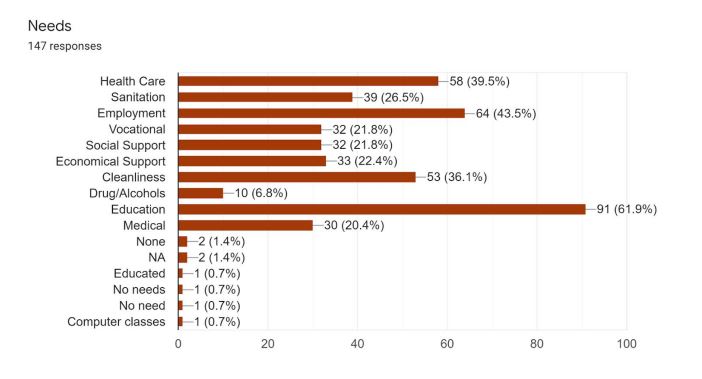 NewLife Shelter Foundation has 3 running projects currently for the community. Households were briefed about these projects and many of them had shown interest to join the on-going projects.

Almost 77.5% households have shown their Interest to send their kids for Akshar Project and the footfall of Children have therefore increased to such number that many Children despite being interested were rejected due to lack of space and mentors.

Some Women with skills have shown their willingness to teach others with us.

Stats for the same are Given Below.

Conducting this awareness program was a necessity for NewLife shelter Foundation to address the issues of the community to the people and also spread awareness of the ongoing projects by NewLife Shelter Foundation which were already out there to solve some of these issues.

As for addressing the Sanitisation problem NewLife Shelter Foundation will be conducting an awareness session for Menstruation for Women of these community on 07th of April, 2022 on the occasion of world health day and will help them solve some issues. NewLife Shelter Foundation will be pursuing this further and solve this in coming days. Sanitisation being a huge problem is not be left untouched by us.

Donate to empower the families, children and women who are deprived to livelihood